Schuylkill County (pronounced /ˈskuːlkɪl/, locally /ˈskuːkəl/) is a county in the Commonwealth of Pennsylvania. As of the 2010 census, the population was 148,289. The county seat is Pottsville. The county was created on March 1, 1811 from parts of Berks, Northampton, and Northumberland Counties and named for the Schuylkill River.

Schuylkill County comprises the Pottsville, PA Micropolitan Statistical Area. It is located in the heart of the anthracite Coal Region of Eastern Pennsylvania.

The Schuylkill River headwaters are found in the county, starting in the Appalachian Mountains, and flows through many towns and the city of Reading, Pennsylvania to Philadelphia where it flows into the Delaware River. The Schuylkill drains the majority of the county while some western and northern areas of the county are drained by the Susquehanna River. The Swatara Creek, Wiconisco Creek, Mahantango Creek, Mahanoy Creek, and Catawissa Creek all start in Schuylkill County and are tributaries of the Susquehanna. Areas of the eastern portion of the county drain into the Lehigh River via the Quakake Creek, Nesquehoning Creek, Mahoning Creek, and Lizard Creek, all of which also start in the county. To the south, southern Schuylkill county is home to Blue Mountain and the Appalachian Trail. Broad Mountain crosses the county from northeast to southwest.

Schuylkill County is located in northeastern Pennsylvania’s Coal Region. It is located just north of the Lehigh Valley and Reading metropolitan areas. Portions of eastern Schuylkill County around Tamaqua are located in the Pocono Mountains. As a result, like other portions of the Poconos, eastern Schuylkill has experienced an influx of people from New York City and New Jersey who commute into Manhattan each day. The commute can take up to two hours each way due to distance and traffic. Far western areas of the county are located near Harrisburg and are sometimes considered to be located in South Central Pennsylvania.

(Courtesy of Wikipedia. To view the full article, Click Here.) 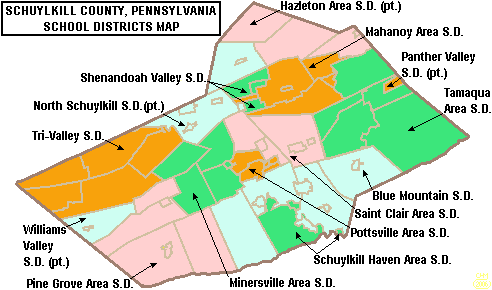